"Roses from the Heart" - the Bonnet Project by Christina Henri

I love conceptual art – is that what it is called? – where there is a story behind it; something that triggered the artist's interest to create something or to enable others to create, to bring people together, make people think and talk and in some cases act themselves, contribute to the art work, spread the word and make a change, challenge a myth or believe or as with the the Bonnet Project help remember and honor  - the 25.556 convict women Great Britain deported to Australia between 1788 and 1853.

Christina Henri's textile art project "Roses from the heart"  touched me when I first read about it in the "Inspiration" Issue No. 51 (an Australian embroidery magazine) in 2006. I went to the quoted website www.femalefactory.com.au read about the female factory's history and found the links to the convict files with all the women's names published to  make us and especially the convict women's descendants and Australians in general remember them. Remember their names, their suffering and cruel life in that then unknown county and most of all acknowledge  their contribution to help settle Australia.

It has been a different time then which might explains though it does not excuse what has been done to them, how they were treated and how many of them and especially of their innocent children had to die. Even more so as they have been shunned for all those years; that is what Christina Henri's project will change.

From what I read in this years July edition of British Patchwork & Quilting, 2 years later "Roses from the heart" has become an international project with people from UK, Ireland, USA and Canada as well as New Zealand, and from  Africa, and the European Countries Spain, Italy, France, Switzerland, Norway and Sweden taking part. Not all of the 25.556 bonnets have been created yet. It shows what a vast number it really is.

If you want to take part and contribute Bonnets go to http://www.femalefactory.com.au/FFRG/fffdb.htm#Records find a relative among those convict women or "adopt" one and make a bonnet in her name. The free bonnet template and sewing instruction can be found on http://www.femalefactory.com.au/exhibit.htm#henri or on Christina Henri's website. There you can also find where to send them and when and where they will be displayed.

In 2010 an installation of at least 10.000 bonnets is planned for the "The Festival of Quilts" in Birmingham, UK  (aka Birmingham Quilt Festival).

Let "Roses from the heart" grow all over "blogland"…

4 1/2" blocks of solid red and white fabric, not patterned, no batiks

The rules for myself – which I will try to follow as best as I can – are:

The "master" must be a red and white design; can be of any material, style etc. except it must not be from a quilt or an existing quilt block!

Any magazine ad, leaflet or flyer, painting, web layout, sculpture, building etc. will do, as long as it is

My quilt is large, 2 x 2 m and I am still determined to do all the quilting by hand. When I took quilting lessons with Ester Miller in Be... 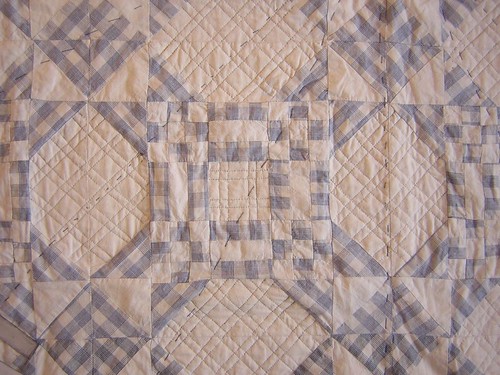